You are in: Home / Workshops / Banner making 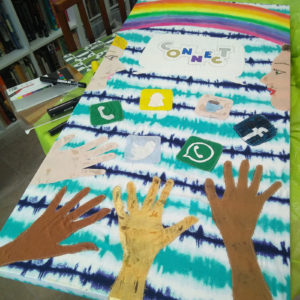 Banners are a great way to work with groups with textiles either to be carried in processions or at events or as decoration. They are good for making an impact. With craft focussed groups, they can be sewn and embellished but are just as effective using glue so do not need specialist skills or equipment.

In a response to recent articles in the media regarding problems of racism in football both on the pitch and from fans, Breightmet Wanderers Athletic Football Club wanted to take part in a march against racism in football. I worked with members of the youth teams to design and make banners for them to carry on the march. The teams gathered in Breightmet and marched to Bolton town centre with the banners led by Indian drummers. They also displayed them at a local football match. Thank you to all at BWAFC for their hard work and for the photos from the event. The project was funded by Bolton at Home as part of their Smart Materials project.

Manchester Gamechangers project run by Tandem Theatre over all 10 Manchester districts explored the Suffragists, women’s rights and the power of peaceful protest. I worked with the Manchester group over a series of craft based activities including creating their own protest banner.

Last summer I worked with the teen panel at Beacon Counselling to create a series of banners representing the 5 Ways to Wellbeing to adorn the staircase at their Stockport base.

These stretched over several sessions but small banners can be made in a single session like the Easter banners made by adults with learning disabilities at The Holiday Project in Warrington.