You are in: Home / Projects / Seasons Mural 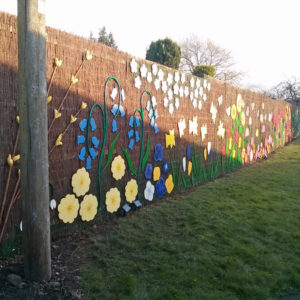 After the Text into Textiles programme, the residents of Lever Gardens sheltered housing asked me back to design a mural for an unappealing 22m long brick wall that several of the flats look out onto. They wanted something bright but not garish and were keen on the theme of nature and flowers. I decided to celebrate classic British flowers through the year stating with January at one end through each season to December at the other end. I thought that a painted mural of this size may be too garish so suggested softening the mural by using brushwood screening as a background. The flowers and leaves were made out of exterior ply and painted with acrylic paints and coated with exterior varnish to protect them. This also meant that the mural could be made in panels at my studio and put up as one meaning less disruption for the residents.

As some of the money had come from the Bolton@Home Smart Materials fund, I had to incorporate these into my design. I investigated all sorts of possibilities. I discovered a hydrochromatic paint that is opaque white but goes transparent when wet revealing whatever is underneath. I used this on some of the willow buds to transform them from white pussy willow to yellow catkins and on some of the bluebells so they went from white to blue and some of the daisies became bright pink. This meant that the mural becomes more colourful in the rain. The hydrochromatic paint had to be applied above the varnish so don’t know how long it lasts but have not had to go back to recoat yet and it has been up for nearly a year. I also used paint that reacts to UV. It is clear but develops a colour in sunshine so I used it to add details and make flowers change colour. I found beads that work in a similar way. These were used in the centres of the blossom and in the mosaic butterflies. I used standard solar powered fairy lights poking trough the brushwood to create stars when the sun goes down.

As part of the project, we ran mosaic workshops with the residents. They created butterflies to add to the summer section of the mural and some to the wall by the external waiting area along with some additional flowers as this was another area that the residents wanted brightening up as was regularly used while waiting for taxis and ambulances.

The commission was funded by Bolton at Home through the Smart Materials project.