You are in: Home / Projects / Library Mural 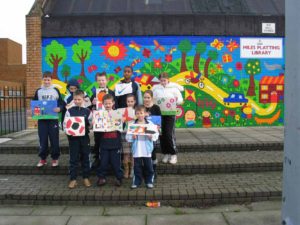 Groundwork commissioned me to brighten up the front of the library in Miles Platting by creating a large mural. Rather than trying to address a particular issue or the history of the area, we just looked at the question ‘What makes you happy?’. Through workshops with local children, I discussed this question and got the children to draw and paint their answers. We held an exhibition in the library and asked the public to vote for their favourites.

From the feedback from the exhibition, I created a design for the mural. I scanned in all the pictures and used Photoshop to develop the design. Focus and prominence was given to the most popular designs however elements from all the designs were used in some way. I designed three additional pairs of panels along the front of the library to extend the design and be able to include those designs that although strong, didn’t necessarily fit in harmony within the main mural.

I painted the mural directly to the wall so the local people saw the process and how it developed. There was a small amount of graffiti in the sketching out stage, but once finished, there were no instances, although I had coated it in a layer of protection to ease cleaning if necessary. With so many different people’s designs featured, there was a real sense of ownership of the mural. As well as those whose designs were featured, I also encountered local lads telling me (and warning mates) that a particular part was by their little sister so the layer of family and friends added to the local pride and appreciation.