You are in: Home / Projects / Manchester Music Icons 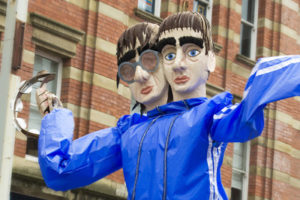 Bridget Halliday from Eastlands Homes applied to Walk The Plank for their Youth Forum to take part in the Manchester Day Parade 2011. They were keen to celebrate music icons from Manchester. They were chosen & after consulting staff at Eastlands Homes, friends & Twitter, we decided on Morrissey, Heather Small from M People & a two headed Oasis puppet. During the two open weekends, members of the Youth Forum came down to the Walk The Plank workshop to help build the puppets. The Oasis puppet is also going to make a guest appearance at the Eastlands Family Fun.

They were joined in the parade by groups from Valuing Older People & The Intergenerational Project who also wanted to celebrate music. They dressed as various music stars & genres and were led by a giant Jukebox and flanked by inflated music symbols.

The photos of the parade were taken by Nicola Jaye.