You are in: Home / Projects / Birthday Cake for Pittenweem Festival 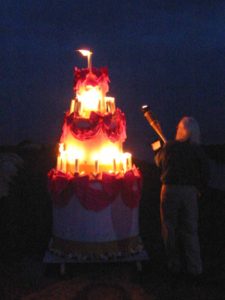 I grew up in Pittenweem and had been involved in the Pittenweem Arts Festival when I was younger including working with sculptor Paul Moodie to create a large dragon for the festival opening night in 1990.

I was invited back to create a cake for their 21st birthday. As with the dragon, this was to be burnt down by the sea accompanied by music and fireworks. The festival director, Bill Stephenson, lit the candles. As the cake burned away, a set of crossed keys topped with a 21 were revealed. This could be seen all along the beach and up on the braes.