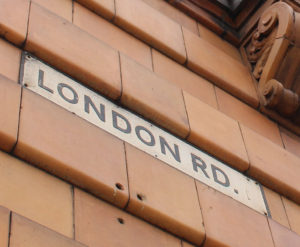 Through an opportunity offered by Jenny Walker to students at Manchester School of Art, I have been part of a project developing work inspired by London Road Fire Station, an iconic Manchester landmark saved from demolition but about to be redeveloped so a unique moment in time to record the lost grandeur and celebrate the history of the place. We were privileged to be able to explore and photograph areas beyond those on the public heritage tours. We had access to the archives at Rochdale Fire Museum and first hand insights from Bob and Les who run the museum. Jenny has been recording interviews with past residents and employees onsite to help inspire the memories and get their reactions to how it is now. These recordings have given an added dimension and richness to the project.

I was naturally attracted to this project as it covered the redevelopment and new purpose for a historical old building but also the enjoyment the beauty of decay. I took many photos of flaky paint, faded signs and peeling wallpaper on my visits as did many others from looking at hashtags on Instagram.

While up at the Fire Museum in Rochdale, Les took me down to their workshop to see the ladder they were restoring and by chance passing a store room filled with old uniforms. I enquired what was happening to them and discovered that they had been decommissioned due to too many repairs or change in uniform design. With my penchant for using old clothes as my main material, this felt like serendipity. I asked Bob if it would be possible to have a couple to work with and he happily obliged and gave me several.I did insist that he gave me the worst ones, the ones destined for the tip rather then being sent abroad to continue to be useful garments.

Once back in the studio, I deconstructed a jacket. I discovered they were made of 3 layers:

The stitching on the lining reminded me of the wood-chip wallpaper that had been used the cover over the bold patterns of the past around London Road. The damp had stained the wood-chip and caused it to come away from the wall, falling in twists and folds. I used the embellisher, stitching, wire and paint to try to capture these qualities in this jacket.

The gortex fabric was pale and lightly textured, reminiscent of old plaster walls. As it was light in colour, I felt this was the best one for printing some of the old photos onto. I attempted gum arabic but it it failed to take as the inks could not penetrate the fabric. I asked the printing department for advice and they pointed me in the direction sublimation printing which was more successful as even though manmade, the fireproof quality meant it was able to withstand the heat of the printing process. I have been sampling both black and white prints at different sizes. The clarity of the images are still quite low but this gives a ghostly quality. I also explored the texture of mould, crumbling walls and flaky paint through free motion embroidery. As I preferred the texture to the colours achieved, I then experimented with painting onto the gortex prior to stitching which I liked more. This jacket celebrates the people and the love of mould.

The FIRE logo on the outer jackets were in different stages of the process of peeling off. My favourites were the ones that were slightly flaky but could still make out the word. I stitched into these to secure the flaking pieces, leaving my threads hanging on purpose. As this was the smoothest layer, I felt it was the most appropriate for screen-printing. I chose to use the original plans for the ground floor and then stitched over them with elements planned for the redevelopment. I also experimented with screen-printing photographs of old signage but although happy with the images, I did not like them in combination with the plans. This jacket represents the building its redevelopment.

I am now refining these as a set of three re-engineered jackets as my piece for the group exhibition in October.