You are in: Home / Blog / Sharing the Teepee 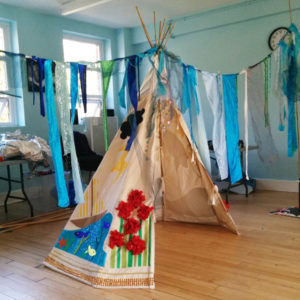 Over the summer I have been stitching a large teepee that will centre stage in DIY Theatre ‘s new show “Following The Thread” that will tour to schools for children with profound and multiple learning difficulties.

There was a list of practical requirements that the teepee needed to meet:

I had run a session earlier in the year making teepees out of bamboo and newsprint and painting them with designs based on the themes of the show. This also helped to fix what size the teepee needed to be. You can read more about that on an earlier blog.

I developed a single design from the three teepees that the group had made. When sharing the teepee with the group, it was great to hear them each being able to spot something from their design. This gives a feeling of ownership especially as the group had already been working on ideas for the show for a year before I was brought in.

I drafted my design up to full scale to create templates for the applique elements. I used an array of brightly coloured fabrics. There were satins and sequins to catch the light and fleece that is soft to touch. Each element was given a backing of Bondaweb to attach it to the calico panels. The larger pieces were sewn around by machine to secure them. I used the gold trimmings in lines along the bottom to represent sand and the diamante trimming to do the rain. I used buttons for eyes on the fish and dolphins to add texture.

The most textured sections are the flowers on the front panels. These were made by using rag-rugging technique. Although they are all red, they are made up of 3 materials: Satin jersey for shine; Rip-stop for crunch; and Fleece for softness. Members of the group helped to make them. This added to their feeling of involvement and ownership of the design.

In the devising and testing phase, they had been using a child’s pop up tent and so the arrival of the finished teepee was cause for great excitement. I am really pleased how happy they are with it and it seems to have given rehearsals a real boost.